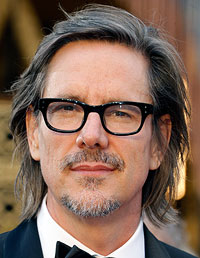 Writers Guild and Academy Award-winning screenwriter Charles Randolph (The Big Short) has been named the recipient of the Writers Guild of America West’s 2020 Paul Selvin Award in recognition of his script for Bombshell. His screenplay is an incisive retelling of Fox News’ sexual harassment scandal in the #MeToo era.

Randolph will be honored at the 2020 Writers Guild Awards West Coast ceremony on Saturday, February 1, at the Beverly Hilton.

“Charles Randolph’s masterful screenplay has turned a challenging and significant cultural moment into a deeply captivating human drama,” said WGAW President David A. Goodman. “His work illustrates that the experience of standing up to abuse transcends the barriers of partisanship and political affiliation. The WGAW is proud to honor him for this outstanding script.”

“I'm moved to receive the Selvin. Since Citizen Kane, screenwriters have told stories based on real people who frustrate easy labels and I’m proud to be the member of a guild that celebrates human complexity," said Randolph, who is also a producer on Bombshell alongside Charlize Theron and Jay Roach.

Based on real-life controversies at Fox News, Bombshell is an explosive story of the women who brought down the infamous man who created it. In three distinct but interwoven experiences, the film explores the sexual harassment scandal that shook the network to its core. With the backdrop of the 2016 presidential election, and Fox’s ascendancy as a media outlet with an outsized influence in American political life, the film remains sharply personal, yet timely and topical in its powerful message of speaking truth to power.

In addition to the Paul Selvin Award, the movie has received a wide range of accolades, including three nominations for the 92nd Academy Awards for actors Charlize Theron and Margot Robbie, as well as Best Makeup and Hair, two for the 77th Golden Globe Awards for Theron and Robbie, four for the 26th Screen Actors Guild Awards for Theron, Robbie and Nicole Kidman, as well as Outstanding Performance by a Cast in a Motion Picture, and three for the 73rd British Academy Film Awards (BAFTA) for Theron, Robbie, and Best Makeup and Hair.

A former cultural studies and philosophy professor, Charles Randolph began his film career when he was inspired to start writing after spending some time in Los Angeles giving lectures at the University of Southern California. In 2016, he won Writers Guild, Academy, and BAFTA Awards for Adapted Screenplay for The Big Short, shared with the acclaimed film’s co-screenwriter-director Adam McKay. His other screenwriting or co-screenwriting credits include Love And Other Drugs (2010), The Interpreter (2005), and The Life Of David Gale (2003). Born in Nashville, Tennessee, Randolph is a graduate of Yale Divinity School. He is married to actress Mili Avital.

Named after the late Paul Selvin, general counsel to WGAW for 25 years, the honorary award is given each year to the WGA member whose script best embodies the spirit of the constitutional civil rights and liberties that are indispensable to the survival of free writers everywhere and to which Selvin devoted his professional life. Previous recipients of the Paul Selvin Award include Dustin Lance Black, Alex Gibney, Margaret Nagle, John McNamara, Susannah Grant, Liz Hannah and Josh Singer, and most recently Adam McKay.