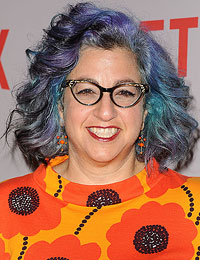 Television series creator-showrunner Jenji Kohan (Orange is the New Black, Weeds) has been named the recipient of the Writers Guild of America West’s 2019 Paddy Chayefsky Laurel Award for Television Writing Achievement, presented to a Guild member who has “advanced the literature of television and made outstanding contributions to the profession of the television writer.” She will be honored at the WGAW’s 2019 Writers Guild Awards L.A. show on Sunday, February 17, 2019.

“Jenji Kohan's work is what all good writers aspire to – touching on the harsh but also comedic realities of life through characters that don't sound written, that talk like real people. Her scenes can be comic and tragic simultaneously; while she engages, she also unnerves, pushing us out of our comfort zone. Her work has truly advanced the literature of television, and the WGAW Board of Directors considers it our honor to give her this award,” said WGAW President David A. Goodman.

Named as one of Time Magazine’s 100 Most Influential People in the World (2014), Kohan is the creator and executive producer of acclaimed series Orange is the New Black and Weeds, as well as executive producer and writer on GLOW.

A WGAW member since 1993, Kohan’s writing credits include penning episodes of Will & Grace, Gilmore Girls, Tracey Takes On…, Sex and the City, Mad About You, Boston Common, The Stones (which she created), and Fresh Prince of Bel Air, her debut writing credit in 1994.

In 2015, she shared a PGA Award (Outstanding Producer of Episodic Television, Comedy) for Orange is the New Black, as well as received three previous PGA noms as an executive producer on Weeds in 2007, 2009, and 2010.

Born in Los Angeles into a family of television writers, she is the daughter of veteran TV comedy/variety writer Buz Kohan and sister of Will & Grace co-creator David Kohan.