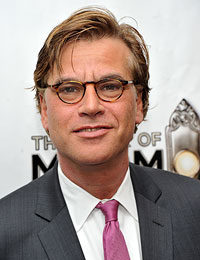 Aaron Sorkin, the Emmy-winning creator of The West Wing and Academy Award-winning screenwriter of The Social Network, is set to receive the Writers Guild of America West’s 2017 Paddy Chayefsky Laurel Award for Television Writing Achievement in recognition of his extraordinary career and outstanding body of work in writing for television.

Sorkin will be honored at the WGAW’s 2017 Writers Guild Awards West Coast ceremony on Sunday, February 19, at The Beverly Hilton in Beverly Hills.

“Starting with Sports Night, through The West Wing, Studio 60 on the Sunset Strip, The Newsroom and beyond, Aaron Sorkin has changed the language of television. His knowing, incisive, witty, brave, deeply intelligent writing has raised the bar for the rest of us, defined the notion of behind-the-scenes, and has in the process reminded us, again and again, of the special responsibilities that accrue to our profession,” said WGAW President Howard A. Rodman. “For as long as people walk and talk – at the same time, of course – Sorkin's dialogue will be remembered. But more crucially, we want to remember the ways he has always encouraged us, as humans and as citizens, to heed our better angels.”

“I’m honored to be chosen for this year’s Chayefsky Award and to join such esteemed company. There’s a lot to live up to here,” said Sorkin.

Acclaimed screen/television writer and renowned playwright Sorkin graduated from Syracuse University with a B.F.A. in Theatre. He made his Broadway playwriting debut at the age of 28 with the military courtroom drama, "A Few Good Men," for which he received the John Gassner Award as Outstanding New American Playwright. The following year saw the debut of his off-Broadway play, Making Movies.

In 1993, Sorkin’s film adaptation of his play, "A Few Good Men," was nominated for four Academy Awards, including Best Picture, and five Golden Globes, including Best Screenplay. He followed the film’s critical and commercial success with screenplays for 1993’s Malice (co-written by Sorkin and Scott Frank, story by Sorkin and Jonas McCord) and 1995’s The American President, which earned him WGA and Golden Globe screenplay nominations.

In the late ’90s, Sorkin segued into writing for television, where he created and produced NBC’s White House political drama series, The West Wing, which won nine Primetime Emmy Awards in its first season alone. The long-running, acclaimed series, which ran from 1999 to 2006, went on to win a total of 26 Primetime Emmy Awards, including “Outstanding Drama Series” four consecutive times. For his work on the series, Sorkin twice received the Peabody Award and the Humanitas Prize, as well as three Television Critics Association Awards, three Producers Guild Awards, a Golden Globe Award, and a Writers Guild Award.

In 2011, Sorkin won the Academy Award, Writers Guild Award, Golden Globe, Critics Choice, BAFTA, and USC Scripter Awards for “Best Adapted Screenplay” for The Social Network. The box-office hit film chronicled the swift rise of Facebook and its social media maverick founder Mark Zuckerberg. It was nominated for eight Academy Awards including “Best Picture,” was named “Best Drama” at the Golden Globes, and appeared on over 350 critics’ lists of the top ten films of 2010.

Sorkin’s next feature was the 2011 film adaptation of Moneyball (Screenplay by Steven Zaillian and Aaron Sorkin, Story by Stan Chervin, Based on the Book by Michael Lewis), the true-story sports drama, focusing on Oakland A’s general manager Billy Beane’s shrewd strategy to utilize computer-generated sabermetric analysis to assemble a baseball team on a lean budget, which resulted in consecutive playoff appearances in 2002 and 2003. The screenplay earned Sorkin a Critics Choice Award and New York Film Critics Award for “Best Adapted Screenplay,” and also received four Academy Award nominations, including “Best Picture” and “Best Adapted Screenplay.”

Sorkin returned to television in 2012, creating the HBO series, The Newsroom. Set behind the scenes of a contemporary cable news show, the ensemble drama starred Jeff Daniels, who won a Primetime Emmy Award for “Best Actor” for his performance as “Will McAvoy” on the show. During its 2012-14 three-season run, the show won a Critics Choice Television Award for “Most Exciting New Series” and received five Primetime Emmy nominations, as well as a Golden Globe nomination for “Best Drama Series,” a Writers Guild Award nomination for New Series, and a DGA nomination.

Sorkin’s most recent feature film was 2015’s Steve Jobs, based on the Walter Isaacson biography of the late Apple co-founder. His screen adaptation garnered him a Golden Globe Award for “Best Screenplay,” as well as WGA and Critics Choice Award adapted screenplay nominations. Sorkin’s other screenwriting credits include the 2007 film, Charlie Wilson's War, which earned him another Golden Globe nomination for “Best Screenplay.” Sorkin returned to Broadway in 2007 with a stage production of "The Farnsworth Invention."

Next up, Sorkin has adapted and will make his directorial debut with Molly’s Game, a feature film based on the personal memoir by Molly Bloom, a beautiful, young, Olympic-class skier who ran the world's most exclusive high-stakes poker game for a decade before being arrested in the middle of the night by 17 FBI agents wielding automatic weapons. Her players included Hollywood royalty, sports stars, business titans and finally, unbeknownst to her, the Russian mob. Her only ally is her criminal defense lawyer who learns that there's much more to Molly than the tabloids lead us to believe. The upcoming film, starring Jessica Chastain, Idris Elba and Kevin Costner, is set for release in 2017.

Additionally, Sorkin will be returning to NBC with an exciting live presentation of his own Broadway play, A Few Good Men, which is slated to air in 2017. Craig Zadan and Neil Meron, known for their work on NBC’s The Sound of Music Live, The Wiz Live, and Hairspray Live, are executive producing along with Sorkin.

In February 2016, it was announced that Sorkin will pen a stage adaptation of Harper Lee’s iconic American novel, To Kill a Mockingbird, set to premiere during the 2017-2018 Broadway season.

Named after one of the most influential writers in entertainment history, the Paddy Chayefsky Laurel Award for Television Writing Achievement is the WGAW’s highest award for television writing, given to writers who have advanced the literature of television throughout the years and made outstanding contributions to the profession of the television writer. Past Television Laurel Award recipients include Steven Bochco, Susan Harris, Stephen J. Cannell, David Chase, Larry David, Diane English, Marshall Herskovitz & Ed Zwick, Joshua Brand & John Falsey, Garry Marshall, Shonda Rhimes, and most recently Marta Kauffman & David Crane.