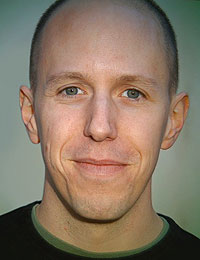 Screenwriter John August (Big Fish, Charlie and the Chocolate Factory) has been named the recipient of the Writers Guild of America West's 2016 Valentine Davies Award in recognition of his humanitarian efforts and civic service, as well as his pivotal role in fostering a community of writers. August will be honored at the WGAW's 2016 Writers Guild Awards West Coast ceremony on Saturday, February 13, at the Hyatt Regency Century Plaza in Los Angeles.

“John is the writer we'd all want to be: wildly intelligent, deeply practical, effortlessly inventive, and generous to a fault,” said WGAW President Howard A. Rodman. “Whether he's creating apps, campaigning for marriage equality, mentoring younger writers, podcasting with Craig Mazin, sitting on our Negotiating Committee, or constructing a school in Malawi, John has made service to the larger community a part of his second nature. Protip: when you find yourself in difficult straits, ask yourself ‘What would John August do?' The times you'll regret are the times you fail to act accordingly.”

Motivated by a desire to share his wealth of experience and knowledge gained over the course of his screenwriting career, from Go to Frankenweenie, August first launched his own screenwriting blog, johnaugust.com, in 2003, which over the last decade-plus has since grown into a vital, go-to resource on the craft and business of screenwriting for industry professionals and aspiring writers alike. In fact, the sheer volume of his widely read screenwriting-centric columns – over 1,500, all written by him – illustrates his influence and impact on both next-gen and seasoned writers around the globe. In addition, August maintains a complimentary website of interest to budding screenwriters, screenwriting.io, providing clear, concise answers to a wide range of questions relating to the craft of screenwriting, from form to formatting.

Along with his friend and fellow WGAW member Craig Mazin, August co-hosts Scriptnotes, his highly rated weekly podcast which explores the art, craft, and business of screenwriting, offering practical info, indispensable knowledge, and lively banter to over 40,000 listeners each week, not only via digital platforms, but at frequent “live” Scriptnotes shows, which are routinely SRO.

Sensing an untapped market and increased user interest, August founded his own tech company, Quote-Unquote Apps, which creates an array of useful screenwriter-centric apps, including the screenwriting app Highland (for writing scripts in plain text using the Fountain screenplay syntax he co-created, which all major screenwriting apps now support) and Weekend Read, designed for reading scripts via iPhone. He also managed to find time to develop and create the Writer Emergency Pack, an educational tool which recently expanded to more than 2,000 classrooms this fall.

As a result, an increasingly vital and empowering social – and social media – hub has developed around August's range of screenwriter-friendly resources and tools, creating a contemporary community of writers, both working professionals and novices alike, where he has emerged as a major, influential voice for an entire generation of new and established writers. In the film festival arena, he also frequently serves as an advisor and mentor at the Sundance Screenwriting Lab.

August's community engagement extends beyond the entertainment industry: He continues to work with FOMO Malawi, a charity organization which cares for over 4,000 orphans in the country, providing food, clothing, and education to the children of Mulanje in the southern region of Malawi. Over the years, he has provided logistical support to the program, as well as aid in the construction of school buildings, among other civil projects to bolster the local African community.

Back at home, August has been strong vocal proponent for gay marriage equality in the U.S., personally involved in the nation's recently successful effort to formally legalize gay marriage on the federal level.

Beginning with his acclaimed screenplay adaption for 2003's Big Fish (Based on the Novel by Daniel Wallace), for which he received BAFTA and Broadcast Film Critics Association Awards (BFCA) nominations, August has maintained a long-term creative partnership with director Tim Burton, collaborating on a string of successful live-action and animated feature films, from 2005's Corpse Bride (Screenplay by John August and Caroline Thompson and Pamela Pettler) and Charlie and the Chocolate Factory, their bold reimagining of Roald Dahl's children's classic, to 2012's Frankenweenie (Screenplay by John August), for which he received an Annie Awards nomination (Writing in an Animated Feature Production) and Dark Shadows (Screenplay by Seth Graham-Smith, Story by John August and Seth Graham-Smith, Based on the Television Series Created by Dan Curtis).

August made his big-screen debut with the quirky rave dark comedy, Go (1999), which he also served as co-producer and second unit director, followed by writing or co-writing both films in the Charlie's Angels blockbuster action franchise, 2000's Charlie's Angels (Written by Ryan Rowe & Ed Solomon and John August, Based on the Television Series Created by Ivan Goff and Ben Roberts) and its 2003 sequel, Charlie's Angels: Full Throttle (Screenplay by John August and Cormac Wibberley & Marianne Wibberley, Story by John August), as well as the futuristic animated film Titan A.E. (Screenplay by Ben Edlund and John August and Joss Whedon, Story by Hans Bauer and Randall McCormick).

In 2007, August made his feature film directorial debut with the indie drama The Nines, which he also wrote, premiering at the 2007 Sundance Film Festival. He also served as executive producer on 2010's big-budget action-adventure, Prince of Persia: The Sands of Time.

On the small screen, August co-created the TV drama series D.C. with Dick Wolf, which he co-executive produced. He has created series for The WB, Fox, and ABC.

On the theatrical stage, August adapted his own screenplay to pen the book for the 2013 Broadway musical production of Big Fish (with music and lyrics by Andre Lippa), chronicling the poignant relationship between a traveling salesman and his adult son and exploring what's behind his father's tall tales.

A WGAW member since 1995, August has served on the Guild's Committee on Professional Status of Writers (Screen) since 2010, as well as the 2014 MBA Negotiating Committee and 2014 Board Nominating Committee.

Born in 1970 and raised in Boulder, CO, August earned a degree in journalism from Drake University and an MFA from USC School of Cinema-Television's Peter Stark Program.

He lives in Los Angeles with his husband, Mike, and his 10-year-old daughter.