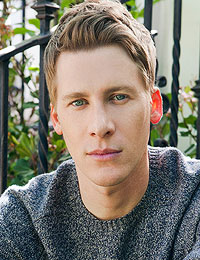 Screenwriter and LGBTQ rights activist Dustin Lance Black (Milk, When We Rise) is set to receive the Writers Guild of America West’s 2018 Valentine Davies Award in recognition for his civil and human rights efforts, which have positively impacted the LGBTQ community. Black will be honored at the 2018 Writers Guild Awards West Coast ceremony on Sunday, February 11, at The Beverly Hilton.

“Dustin Lance Black is the embodiment of the Valentine Davies Award. A tireless advocate for the cause of LGBTQ+ rights, his accomplishments in that arena have been truly profound. The Board of Directors of the WGAW considers it our honor to give him this award,” said WGAW President David A. Goodman.

In 2009, Black earned an Academy Award and Writers Guild Award, as well as the WGAW’s Paul Selvin Award, recognizing written work which embodies the spirit of constitutional rights and civil liberties, for Original Screenplay for Milk, the inspiring biopic of late gay rights activist Harvey Milk. In addition to garnering PEN Center USA’s Literary Award, as well as BAFTA and Humanitas Prize nominations for his Milk screenplay, Black received the “Hollywood Breakthrough Award” for Screenwriter of the Year at the Hollywood Film Awards.

He is also a founding board member of the American Foundation for Equal Rights (AFER), which successfully led the federal cases for marriage equality in California and Virginia with lawyers David Boise and Ted Olson, putting an end to California’s discriminatory Proposition 8.

In 2012, Black merged his creative and civil rights work with “8,” a play based on the Federal Proposition 8 trial. The L.A. production’s cast included George Clooney, Brad Pitt, Martin Sheen, Kevin Bacon, and John C. Reilly. The play was broadcast live, has been staged in eight countries, as well as all 50 U.S. states, and continues to break viewership records online with over a million viewers.

Since winning the Oscar for Milk in 2009, Black has split his creative time in order to fight for LGBTQ+ equality at the national level. Beyond working with the American Foundation For Equal Rights (AFER), he served three years on the board of the Trevor Project, a national LGBTQ youth crisis hotline, where he established a permanent hotline in Harvey Milk’s former camera shop on the Castro District. Black has also been on an equal rights speaking tour, and was one of a handful of organizers of the LGBT March on Washington in October 2009, where he spoke to an audience of over 150,000 demonstrators in front of the nation’s Capitol. Recently, Black has expanded his scope to international activism: He is one of the co-founders of the Uprising of Love Coalition, which seeks to raise awareness of violence and discrimination committed against LGBTQ+ people in the international community.

Raised in a devout Mormon household in Texas, Black signed on in 2004 to draw on his Mormon childhood experiences in San Antonio as a writer and co-producer on HBO’s Emmy and Golden Globe-nominated polygamist drama series Big Love, starring the late Bill Paxton. He continued to write for the show through its third season in 2008. During that time, Black penned the screenplay Pedro (Screenplay by Black, Story by Paris Barclay & Black), depicting the life and legacy of famed openly gay, HIV-positive Real World cast member Pedro Zamora. The film earned Black his second WGA nomination (Long Form Original), as well as Humanitas Prize nom, after it premiered on MTV and VH1 in 2009.

In 2011, Black earned his second “10 Best of the Year” award from the American Film Institute for his Clint Eastwood-directed screenplay, J. Edgar, an illuminating biopic of notorious, closeted FBI Director J. Edgar Hoover. Black made his feature directorial debut with Virginia in 2012. In 2013, Black began work creating the ambitious miniseries When We Rise, which premiered on ABC last February. The acclaimed miniseries, inspired in part by the unpublished manuscript by gay rights activist and Milk colleague Cleve Jones, chronicles the true stories of the personal and political struggles, setbacks, and triumphs of diverse LGBTQ activists who pioneered the modern LGBTQ rights movement from 1971 to present day in America.

Black is currently developing the telefilm Bayard for HBO, a biopic chronicling the life of civil rights activist and gay trailblazer Bayard Rustin, who organized 1963’s historic March on Washington, which drew a crowd of 250,000 and where Martin Luther King, Jr’s seminal “I Have A Dream” speech took place. He is also developing a limited series, Lindbergh, for Paramount Television, which will follow the tumultuous life of famed pilot Charles Lindbergh. He is adapting Jon Krakauer’s non-fiction book, Under the Banner of Heaven, as a limited series for FX, with Ron Howard attached to direct. Black is also set to direct The Statistical Probability of Love at First Sight, a feature film which confronts the science of love and attraction for a modern audience.

Black has taught MFA screenwriting at UCLA, regularly appears on MSNBC, the BBC and CNN, has had three books published, has written for major screenwriting magazines, contributes to The Daily Beast and The Huffington Post, topped the list of Out Magazine’s “40 under 40,” and has been named one of the 50 most powerful LGBTQ people in America today. In 2017, Black married his partner, UK Olympic diver Tom Daley, and lives in London.