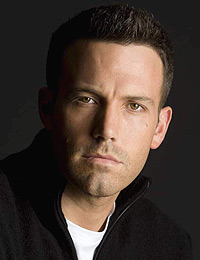 The Writers Guild of America West has named screenwriter-director-actor-producer Ben Affleck the recipient of the WGAW's 2015 Valentine Davies Award in recognition of his humanitarian efforts and service to the global community. Affleck, currently starring in the box-office hit thriller Gone Girl, will be honored at the WGAW's 2015 Writers Guild Awards West Coast ceremony on Saturday, February 14, at the Hyatt Regency Century Plaza in Los Angeles.

"Ben Affleck needs no introduction here. Yet this Oscar-winning screenwriter – twice nominated for Writers Guild Awards – and much-lauded actor/director/producer has somehow found the time to become an engaged leader in humanitarian causes here and abroad. Perhaps most crucially, Affleck founded the Eastern Congo Initiative, a grant-making and advocacy group that works toward an eastern Congo with opportunities for economic and social development and the flourishing of a robust civil society. Affleck has traveled extensively in support of these initiatives with energy, commitment, intelligence, and effectiveness, devoting large amounts of time and presence. And in doing so, he has raised the bar for what it means, in this community, to be a socially committed citizen," said WGAW President Chris Keyser.

A two-time Academy Award winner, Affleck has been recognized in the industry for his work as a director, actor, writer, and producer. In addition to his successful film career, Affleck is also a passionate advocate, working to raise awareness and support for community-driven solutions for social and economic change in Democratic Republic of the Congo.

In March 2010, Affleck founded Eastern Congo Initiative (ECI), the first U.S.-based advocacy and grant-making organization focused on working with the people of eastern Congo to increase the quality and quantity of investments in a region mired by conflict and instability. Affleck has traveled to the Congo on numerous fact-finding missions, met with countless Congolese, testified before the U.S. Congress on three separate occasions, and held meetings with senior officials in the U.S., DRC and other governments to raise global attention and action toward lasting impact.

Since its inception, ECI has made 80 grants to create and support smart, effective and sustainable economic and social development opportunities. ECI's grants have made important investments to strengthen and revitalize DRC's cocoa and coffee sectors, help reintegrate former child soldiers into society and address the health needs of woman and children.

In addition to his important work with ECI, Affleck continues to be a strong supporter of many charitable organizations, including Feeding America (for which he helped launch the "Small Change" campaign with Ellen DeGeneres), Paralyzed Veterans of America, A-T Children's Project – a clearinghouse for ataxia-telangiectasia information, including disease information, scientific research, clinical and family support, and fundraising – and the Dana-Farber Cancer Institute's Jimmy Fund, which has raised millions of dollars through thousands of grassroots efforts to help save lives and give hope to cancer patients everywhere.

Affleck directed, produced, and starred in the award-winning hit 2012 film Argo, a fact-based drama about the then-classified mission to rescue six Americans trapped in Iran during the 1979 hostage crisis. One of the most acclaimed films of 2012, Argo swept the year's top honors, including the Oscar, Golden Globe, and BAFTA Award for Best Picture. Affleck also won Golden Globe, BAFTA, and Critics' Choice Awards for Best Director, and was nominated for a BAFTA Award for Best Actor. In addition, he won a Directors Guild of America Award; a Producers Guild of America Award, shared with George Clooney and Grant Heslov; and a Screen Actors Guild (SAG) Award as a member of the film's ensemble, which won for Outstanding Motion Picture Cast. Among its numerous other honors, the film won Oscars for Best Adapted Screenplay and Best Editing, earned four more Oscar nominations, and was named one of the top 10 outstanding films of the year by the American Film Institute (AFI), as well as numerous critics. Argo screenwriter Chris Terrio earned a Writers Guild Award for his Adapted Screenplay (Based on a selection from The Master of Disguise by Antonio J. Mendez and the Wired magazine article "The Great Escape" by Joshua Bearman).

Affleck made his directorial debut in 2007 with the feature film Gone Baby Gone, for which he earned several critics groups' awards, including the Best Directorial Debut Award from the National Board of Review. Additionally, he won the Breakthrough Director of the Year Award at the 2007 Hollywood Film Festival. Affleck also co-wrote the film's screenplay with Aaron J. Stockard, based on the novel by Dennis Lehane.

In 2010, Affleck directed and starred in the Boston-based heist drama, The Town, in addition to co-writing the screenplay (Screenplay by Peter Craig and Ben Affleck & Aaron Stockard, Based on the novel Prince of Thieves by Chuck Hogan). The film was named among the top 10 films of the year by the AFI, and the cast won the National Board of Review Award for Best Ensemble. Affleck shared a Writers Guild Award Adapted Screenplay nomination for The Town with co-screenwriters Craig and Stockard.

In 2014, Affleck starred in David Fincher's suspense drama Gone Girl. His upcoming roles include portraying the Dark Night in Warner Bros' Batman v Superman: Dawn of Justice, and starring in Live by Night, based on the Dennis Lehane novel.

Affleck first came to prominence in 1997 with the acclaimed feature film Good Will Hunting, which he co-starred in and co-wrote with Damon. The writing duo won an Academy Award for Best Original Screenplay, as well as a Golden Globe Award and Humanitas Prize, in addition to sharing a WGA Original Screenplay nomination. The following year, Affleck starred in John Madden's Oscar-winning Shakespeare in Love, sharing in a SAG Award for Outstanding Motion Picture Cast. The acclaimed hit film went on to earn multiple Oscars in 1999, including Best Picture.

In 2006, Affleck earned widespread praise for his portrayal of ill-fated actor George Reeves in the noir drama Hollywoodland. The film premiered at the Venice Film Festival, where he won the coveted Volpi Award for Best Actor. He also received Golden Globe and Critics' Choice Award nominations for Best Actor, as well as the Best Actor Award at the Hollywood Film Festival. In addition to starring in To the Wonder for director-screenwriter Terrence Malick, Affleck has starred in such diverse films as The Company Men, State of Play, He's Just Not That Into You, Jersey Girl, Daredevil, The Sum of All Fears, Changing Lanes, Pearl Harbor, Boiler Room, Forces of Nature, and Armageddon.

In 2000, Affleck partnered with Matt Damon, Chris Moore and Sean Bailey to form LivePlanet, Inc. Their first endeavor, Project Greenlight, premiered in 2001 on HBO and drew critical, audience, and industry attention for its behind-the-scenes look at the challenges faced by a first-time filmmaker. The second season of Project Greenlight aired on HBO in 2003, with a third season broadcast on Bravo in 2005. All three seasons were nominated for Emmy Awards. After a decade-long hiatus, the fourth season of Project Greenlight returned in 2014 in search of the next great filmmaker. This past November, they announced first-time director Jason Mann as this latest season's winner. The series, to air on HBO in spring 2015, will capture the entire process as Mann directs his first feature-length film, with Affleck and Damon serving as filmmaking mentors.